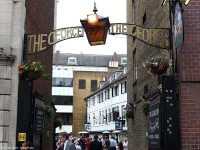 Regular readers of my blog may have noticed that I have been quiet lately. This reticence is partly because my bloggable life has not been that eventful.
However not long after the London Bridge terrorist outrage, I dined at the George Inn in Southwark (just south of London Bridge).
The George Inn was built in 1677 and is the only galleried inn in London. The street was reasonably busy, since London Bridge is a major railway terminus for the Kent towns. The George is quite close to the site of the Tabard which features in the opening lines of the Canterbury Tales:

At nyght was come into the hostelrye
Wel nyne and twenty in a compaignye
Of sondry folk, by aventure yfalle
In felaweshipe, and pilgrims were they alle,
That toward Caunterbury wolden ryde

The George was busy and the coaching area was now full of drinking people enjoying each other’s company before going home. The two bouncers at the front of the yard may have been permanent and not just because of terrorist security issues.
I sensed that the overall feeling in London was of not letting the security situation get one down or restrict one’s social life.
Ten days later I treated myself to a fish and chip supper at the Fishbone in Cleveland Street (between Great Portland Street and Tottenham Court Road). Coincidentally opposite the restaurant was the George & Dragon pub. From what I could see it was not very large but there were about a hundred people outside drinking and enjoying themselves as if the terrorism threat was totally elsewhere.
Perhaps it is all in the survivorship genes. People are around today because their ancestors survived previous horrors. If you don’t keep going forward then you lose out on the game of life.