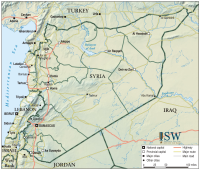 Today’s Telegraph (Business Section) contains a fascinating article by Allister Heath on the Arab Spring debacle and now Syria’s civil war. The article starts …
Abstract ideas matter, of course, but economic forces are usually central to the violent upheavals that regularly tear apart human societies. Sometimes the economic factors are hidden but mostly they are glaringly obvious, as with the rise of Nazism, which followed the catastrophic Weimar hyperinflation of the 1920s and the German economic crisis of 1931.
The economic backdrop to the Arab Spring debacle and now Syria’s barbaric civil war is equally self-evident. With only a small number of exceptions, states in the region have long specialised in economic failure of the most abject kind, seemingly competing to become the most shocking case study in how to squander oil money, ruin a nation’s economy and keep ordinary people impoverished.
Syria’s GDP per person is just $3,289 (£2,122) a year, an abysmally low number; it is no coincidence that it is almost identical to Egypt’s, another country where a small ruling class has mastered the art of kleptocratic exploitation. Add to that a despotic political system, high and rising food prices, a youthful population with little hope of fulfilling its dreams – including many underemployed graduates – and well-organised extremist movements and you get a predictably explosive cocktail.
The article concludes…
The only answer is a complete economic, political and cultural transformation, including an embrace of a real, liberal capitalism, the dismantling of monopolies, a bonfire of privileges and the introduction of genuine pluralism and constitutionally limited government. None of this tells us definitively whether the West should intervene in Syria or not but it certainly confirms that merely lobbing a few missiles at the regime won’t be enough to make a real difference.
The full article may be found on
http://www.telegraph.co.uk/finance/economics/10284077/Syria-needs-liberal-capitalism-not-missiles.html